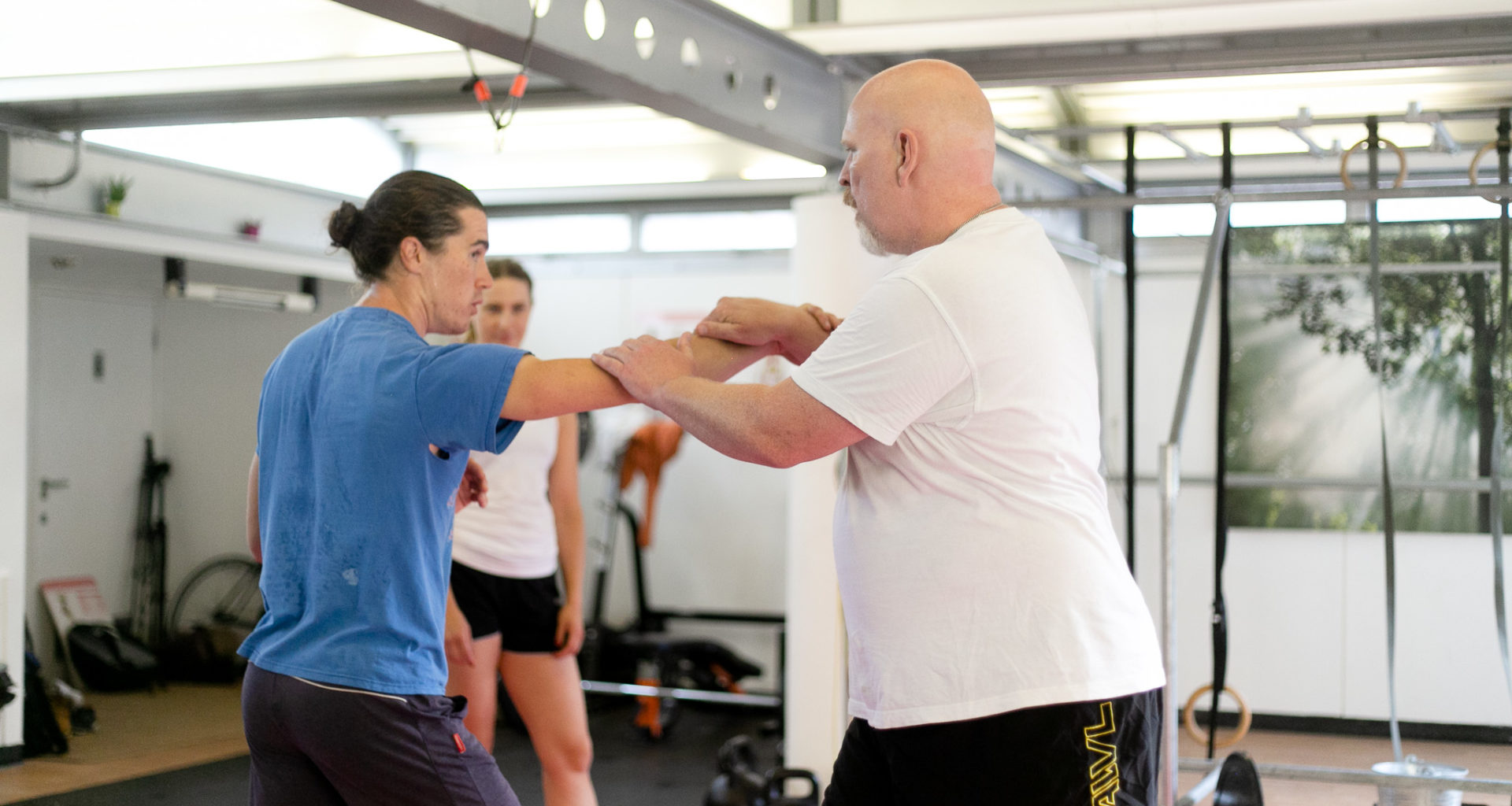 self defence classes in London

We run self defence focusses training in Camden Town, London. Sessions run from 7-9pm on Mondays and Wednesdays and are suitable for all levels.

The focus of the class is to make the training accessible for anyone that wants to learn real martial arts in a friendly and engaging environment. The syllabus was originally put together to prepare full contact fighters who competed in the full contact ‘Let Tei’ fights in south east Asia. Prior to that it was to to presidential bodyguards in China, and includes weapons work as well as unarmed aspects.

This means that the systematic approach to training is realistic, efficient and highly effective. Our class is extremely friendly though, so whilst you will learn proper self defence, the training  atmosphere is fun and engaging.

Real self defence skills you want

Self defence isn’t the same as fighting. In self defence you are more concerned with escaping unharmed, whilst becoming a fighter, you want to learn to ‘defeat’ opponents. There is a crossover, but they are not the same. Everyone can improve their self defence capacity.

There are essentially two types of self defence, the type where you known you are about to be attacked, and you can potentially de-escalate/ or evade the attack. This could be where you ‘spill someones pint’ for example and they want to intimidate you but can be appeased by a simple show of respect/combined with strong body language etc. Self defence for these scenarios is more psychological if you don’t want to fight.

Predatory styles of attack, such as being attacked from behind or randomly attacked by someone who is intent on causing you serious harm, is more difficult to deal with and requires a physically skilled response.

In the first kind of scenario you can develop effective self defence skills by learning the fundamentals of attack psychology, good body posture and ‘guard’ work and effective use of language. In the second, your body has to become skilled and conditioned in effective martial methods.

Fundamental skills absolutely necessary for all around self defence

The video above shows a typical drill that mixes defensive tactics, footwork and grappling.

The following is an exhaustive look at the subject but are the basic categories for good physical self defence, once an attack has been launched at you.

Root: this is your ability to maintain foot contact with the ground, when somebody has launched a random surprise attack with a lot of momentum. Or if you are dropped to the floor, you need instinctive ways of getting back up.

Wrestling ability: This is the ability to use leverage and sensitivity and awareness of instinctive response in an opponent to dominate an opponent in terms of positioning when in a clinch or grappling scenario. Being a good wrestler will let you put the opponent where you want them and to get out of disadvantageous positions. Also throws used correctly can completely disable an opponent. Locks and limb breaks can be included in this category, as well as rock solid choking techniques.

Evasion and neutralising skills: Being able to evade punches, kicks or pushes and pulls as well as the ability to neutralise these, combined with a good root will keep you very safe, and allow you to position yourself for an effective counter-attack.

Stopping power/Shot selection ability: Being able to pick out the must vulnerable targets in an opponent and to strike them with significant power so that you can prevent them from continuing their assault. Strikes should trained to be delivered with all the weapons your body can offer you. fist, foot, elbow, knee, palm etc..

How this class develops these self defence skills

We use a lot of drills to build up attributes that are useful for self defence and fighting. Things like footwork, timing, use of full body power etc. These are often done with a partner.  Then we work on aspects of your physical strength and power, as well as stamina. A reality in self defence is that you need to be in a good enough physical condition to be able to apply the techniques, so we work and develop your physical capacity.

We practice a lot of partner drills, designed to tech you a wide variety of fighting techniques, and to cultivate your ability to respond naturally when an opponent attacks you. Strikes, punches, kicks, evasion, diversions, locks, throws and takedowns etc are drill thoroughly so they become second nature.

We do a lot of impact work, pad work and so on to develop your power speed and accuracy, as well as ability to strike fluidly in long combinations.

We practice a lot of grappling drills, and wrestling development activities so that you cultivate effective and spontaneous grappling abilities. For anyone who wants to spar (light to heavy) we do this too, though it’s not mandatory.

How long does it take become effective

You can acquire effective self defence skills after about 3-6months if you attend regularly, work on your conditioning and drill the techniques intently. You can also practice everything at home so that you really ingrain the techniques and movements into your system. If you engage with the art intelligently and study it properly you can be extremely effective in a short period of time. There is a lot to learning a martial at properly so the more you practice and invest effort, the better you will get!

Any man or woman who ants to improve their ability to look after themselves can join the sessions. Age isn’t important, fitness isn’t important – only a good positive attitude and willingness to train and practice hard.