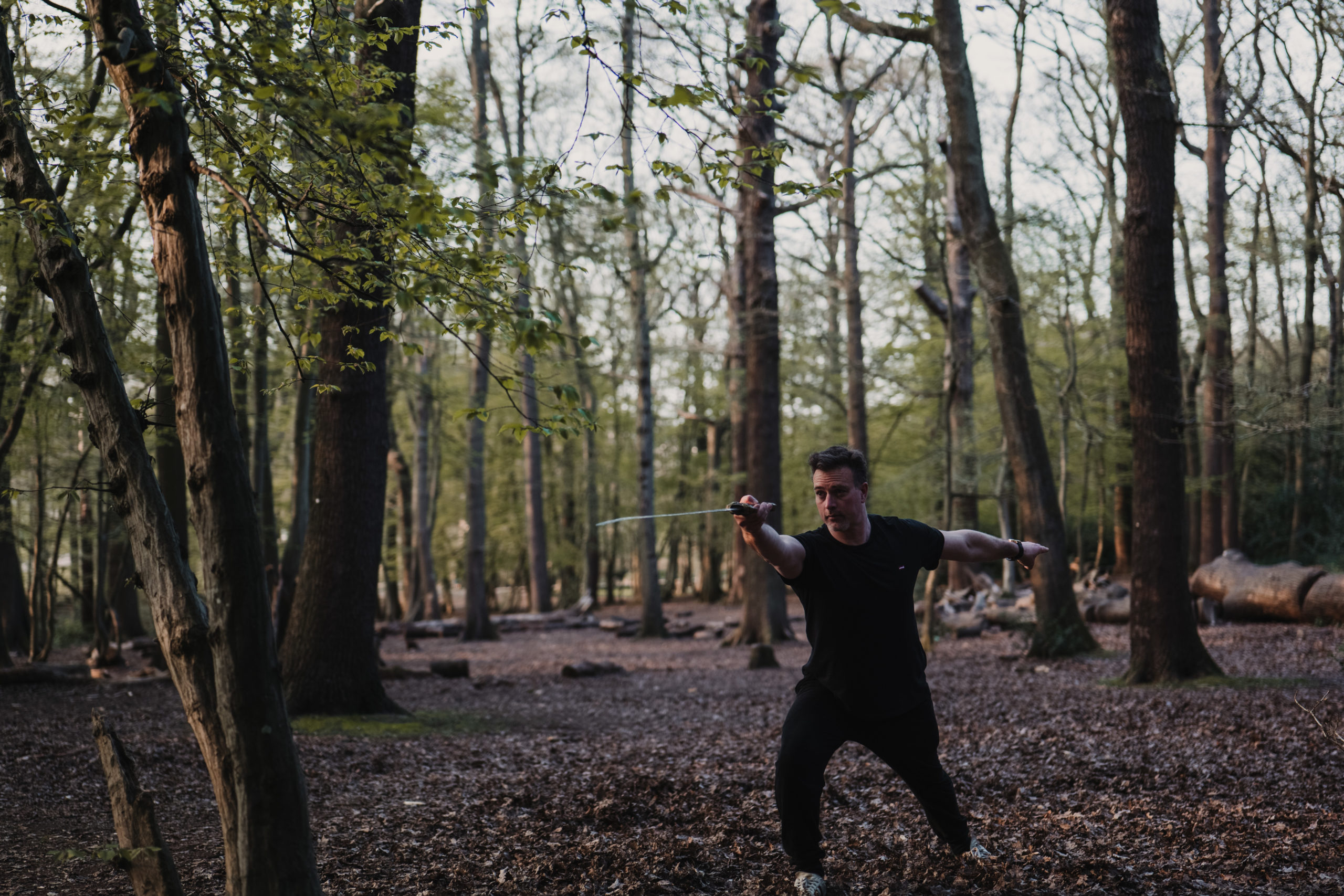 At an early age Neil began training in martial arts, after being heavily inspired by his fathers practice of Tai Chi, and reading his various books on martial arts training and Chinese philosophy. His first system of formal training was an eclectic system of Northern Preying Mantis, a Shaolin system which had been systemised in Malaysia.

This system was a well organised system, which mixed grappling, sweeping and throwing techniques with Northern Shaolin kicking techniques. There was a strong emphasis on fitness, body conditioning and heavy sparring, though no head contact .

After training to what was considered black belt standard, Neil came across the article ‘Tai Chi gladiator’ . The article detailed the experiences of Neil’s future teacher, learning Tai Chi as a fighting art in Hong Kong under the tutelage of the famous master Cheng Tin Hung. Luckily Dan was now teaching in Covent Garden, London, allowing Neil to go along and try the class. For a while he continued training in both the Preying Mantis and Dan’s fighting Tai Chi system, though after a while he chose to devote himself to training in Tai Chi only.

The tai chi system Dan taught was very different to other tai chi styles. There was a heavy emphasis on fitness, conditioning and power training, as well as the more internal, reflective and soft aspects often generally practiced. After a good standards had been reached in the basics, some students were invited to begin heavy sparring training, which was 100 percent full contact and often ending in knockouts. This was the way this system of Tai Chi was practiced in Hong Kong.

After practicing hard for a few years Neil began entering some of the pushing hands contests and competitions of the time, which are basically free wrestling events. Some of the early ones were on raised platforms, though due to some severe injuries to participants they were discontinued. At the age of 18 Neil won the British Championships, which qualified him to participate as part of the national team, in the world championship, The Chung Hwa cup, in Taiwan. He won his matches there, but couldn’t finish the competition due to the withdrawal of the British team in protest of dubious refereeing and systematic cheating by the organising committee.

Soon after Neil began to meet with some of the early adopters of Uk MMA, including Lee Hasdell the godfather of uk mma and the first international fighter and promoter. His two main practice partners at the time were the top European competition fighters as well as other pioneers of the movement. After participating in various trial matches Neil was asked to compete and challenge for the heavyweight title in professional mma (called vale tudo back then). So he became the first Tai Chi fighter to partipate in this style of competition. Due to work commitments and dispersal of his training partners the majority of his practice for the event was simply Neigong training. You can see some of the match below;

This original group of mma people went on to become the well known London Shootfighters.

In 2000 Neil and his student Sami Berik took part in the first European Tai Chi Championships, where they competed in 23 matches between them winning all and losing none. They both were awarded European Championship titles in both their categories, Neil winning the heavyweight titles.

As well as teaching Tai Chi Neil also worked for many years in the evening in nightclub security, primarily the exclusive west end of London venues, including the legendary China White.

Working in nightclub security gave him many opportunities to use tai chi for defence and control, as well as implement its excellent de-escalation methods and pushing hands methods.

He also got the opportunity to work with and exchange knowledge with other well known and talented security operatives from around the world, many of whom came from military/special forces backgrounds.

As part of his ongoing mission to practice and teach only the very best practices possible, Neil has continually researched his own system of Tai Chi, triangulating informations sources and distilling it into his own approach. His most recent research has been with Cheng Tin Hung’s son Yan, who has shared his detailed understanding of his fathers approach within this system of Tai Chi.

As an enthusiastic practical martial artist, Neil has always put physical conditioning at the forefront of martial practice, a lesson taught to him from his early preying mantis days. In these sessions a wide variety of traditional callisthenics exercises and stretching routines were practiced for 90 mins or so before every technical session.

From his early tai chi competition training he was taught the full contact conditioning methods that had been handed down by fighting tai chi masters of the generations which built a powerful physique that could operate in extreme fighting situations without losing energy.

This included the mysterious Neigong training as well as other highly efficient and specific strengthening, power building and stamina developing methods for martial artists.

Throught the training he would always strive to understand the scientific basis for such training and how everything worked at the core and if these methods could be effectively supplemented by modern scientific methods.

After learning powerlifting and weight training, Kettlebells were one of the techniques that appealed to Neil as providing the opportunity to individuals to build a useful type of strength and power without needing to travel to a specialist gym. He became highly interested in the tool and travelled to Latvia in around 2003 to study with Vasily Ginkgo, the legendary 7 time world kettlebell champion. He spent a painful month at the Olympic training centre, doing two private learning sessions each day under Vasily’s tutelage. One of the remarkable things he learned was that the so called ‘what the bell’ effect with kettlebells was real.

After 3 or so weeks of twin daily sessions he attempted an unassisted bench press, putting up 155kg quite easily, despite not practicing it for a few years. His previous best had been around 125kg. Since then he uses kettlebells a lot for anyone looking to improve their strength, power or physique,and who don’t want to go the martial arts route.

After being one of the UK’s early promoters of kettlebell lifting through his Powerseekers company and the British Kettlebell Lifting Federation, he decided it was time to do more research within the science of training. This led him to study for an MSc in Strength and Conditioning at Edinburgh university.

Over the years I have worked with a wide variety of students, each one with their own unique requirements. As a practitioner of a highly practical internal martial arts system, I believe almost anyone can benefit from its practice. Some of the types of people I have or continue to work with are;